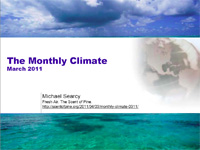 March 2011 began with a major setback to improving NASA climate observation capabilities with the launch failure of the Glory satellite. Intended to improve both solar monitoring and aerosol impacts on global climate, Glory suffered a fate similar to its 2009 predecessor, the Orbiting Carbon Observatory (OCO), which also experienced a launch failure aboard a similar model rocket. A replacement for OCO, the OCO-2, is slated for launch in February 2013. Notable research results concluded that the movement and melting of Antarctic icebergs influence the distribution of phytoplankton and the absorption of carbon dioxide in the Southern Ocean, one of the most prominent carbon sinks in the world, and that the contrails left behind aircraft “can evolve into cirrus clouds indistinguishable from those formed naturally” potentially resulting in a greater warming impact than that caused by all of the carbon dioxide emitted from aircraft since the beginning of aviation.

This month also saw the release of a report from the U.S. National Research Council (NRC) in response to a request from the U.S. Navy. Based on the measured and projected impacts of climate change, the report advised that “U.S. naval forces should begin now to strengthen capabilities in the Arctic, prepare for more frequent humanitarian missions, and analyze potential vulnerabilities of seaside bases and facilities”. Two separate reports from the United Nations examined the relationship between urbanization and future climate change and the long-term impacts of changing climates on global food production. The United Nations Human Settlements Programme (UN-HABITAT) noted that while occupying just 2% of global land mass, cities are responsible for up to 70% of industrial greenhouse gas emissions. As urbanization continues to increase, cities also present the greatest opportunity for remediation of these emissions. Meanwhile the Food and Agriculture Organization of the UN (FAO) warned of potentially catastrophic long-term impacts of climate change of food security. Alexander Müller, FAO Assistant-Director General for Natural Resources, stated that, “‘slow-onset’ impacts are expected to bring deeper changes that challenge the ecosystem services needed for agriculture, with potentially disastrous impacts on food security during the period from 2050 to 2100,” and encouraged developing increased resiliency for agriculture particularly in the developing world.

Climate change remained a contentious political topic around the world with the Republican party in the U.S. working within both the House of Representatives and the Senate to limit the ability of the U.S. Environmental Protection Agency (EPA) to regulate carbon emissions from power plants and the like via the Clean Air Act. Debate also permeated Australian politics as Professor Ross Garnaut, a primary economic advisor to the Australian government, continued his 2011 updates to his initial 2008 Climate Change Review, with this month’s reports noting the increased scientific data supporting climate change theory and recommending a carbon pricing approach to address emissions targets.

The end of the month saw Arctic ice reaching its yearly maximum, an amount that tied with 2006 for the lowest in the satellite record according to the U.S. National Snow and Ice Data Center (NSIDC), and Congressional testimony from Dr. Richard Muller of the University of California, Berkeley, and Lawrence Berkeley National Laboratory as he presented early results from his Berkeley Earth Surface Temperature (BEST) project. Intended to be an independent assessment of global temperature trends over the industrial age, Dr. Muller was surprised to find that the early results from BEST, which included a 2% sampling of global temperature records, aligned closely with existing results from NASA, NOAA, and the UK Hadley Centre. Final results from the BEST project are expected in the coming months.