In this section of our discussion on global warming and climate change, we’ll be covering some of the current conditions of both forcings and effects within Earth’s climate system.

Up to this point, we noted that carbon dioxide is a primary driver of long-term changes in the Earth’s vital greenhouse effect and that human activities have driven atmospheric CO2 levels to their highest point in 650,000 years and at a rate likely unprecedented in Earth’s history outside of catastrophic events. 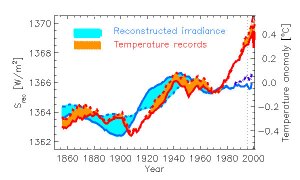 We discussed how our planet’s climate system naturally seeks a balance between forcings and effects and how CO2 levels are rising much faster than natural systems can compensate, resulting in an imbalance in the climate system.

The Role of the Sun

Let’s first consider the Sun. Variations in solar irradiance during the roughly 11-year sunspot cycles generally fall within a very small range. However, there can be longer trends of increased activity or dormancy. Extended periods of solar activity or dormancy are often associated with the Medieval Warm Period which saw the Vikings settle parts of Greenland and the Little Ice Age which saw Britons skating on the river Thames.

Figure 4-2: ENSO has been steady over the past 30 years. Data source: NOAA. CLICK TO ENLARGE

As displayed in Figure 4-1, reconstructions of solar irradiance over the last 150 years correlate fairly well with temperature records, with the notable exception of the last 30 years. Since 1978, direct satellite monitoring of solar activity has shown very little variation in the Sun’s irradiance and, if anything, a slight decline. In fact, the last couple of years has seen the Sun experience its deepest solar minimum in recent memory.

Learn More
How Strongly Does the Sun Influence the Global Climate?

So, the solar influence over the last 30 years has been one of stasis in the climate system if not a promotion of cooling.

Temperature Trends in the Pacific

Global temperatures can also be influenced by oceanic conditions. By now, we’ve all heard of the climate condition known as El Nino, and its cousin La Nina, which refer to oceanic and wind patterns over the equatorial Pacific ocean. Shifts in these conditions generally last several months and can have a significant influence on temperatures. A particularly strong El Nino condition in 1998 is credited with helping to push global temperatures to some of their highest levels on record.

However, these conditions, while influential, are short lived. Looking in Figure 4-2 at the 30-year trend of the El Nino / Southern Oscillation (ENSO) index, which tracks these conditions, we see that over the last 30 years, ENSO has promoted a stasis condition in the overall climate. 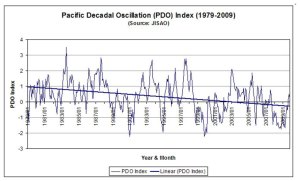 Figure 4-3: The PDO has trended down in the last 30 years. Data source: JISAO. CLICK TO ENLARGE

“The Pacific Decadal Oscillation (PDO) has experienced phase shifts that coincided with the major periods of warming and cooling in the 20th Century.”
– Dr. Roy Spencer, University of Alabama, Huntsville, October 2008

Similar to El Nino and La Nina, the Pacific Decadal Oscillation, or PDO, refers to ocean and wind patterns in the Pacific Ocean. However, where ENSO conditions are focused near the equator, PDO conditions focus on the northern Pacific. Where ENSO conditions generally last for months, shifts in the PDO between its warming and cooling phases can extend for a decade or longer. And, while ENSO shifts are reasonably predictable, PDO shifts are more difficult to pin down. Perceived long-term changes from one phase to the other can be unexpectedly cut short.

Examining its trend over the last 30 years in Figure 4-3, the PDO index has promoted cooling conditions. 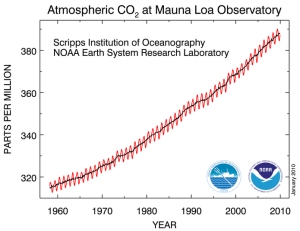 So what role is played by volcanoes? During a volcanic eruption, massive amounts of gases and ash are ejected into the atmosphere. Aerosols from these eruptions can reflect sunlight back into space, and, if the eruption is large enough, winds in the stratosphere can carry these aerosols around the planet, impacting global temperatures for a brief period of time. This was the case in 1991 when aerosols from the eruption of Mt. Pinatubo in the Philippines decreased global temperatures 1 to 2 degrees for a period of about two years.

The last 30 years has seen no decline in volcanic activity and has included the eruptions of Pinatubo as well as El Chichon in Mexico in 1982. As a result, any volcanic influence over the last 30 years would be one of cooling.

Now we come to increases in atmospheric CO2 concentrations driven by human activities. As shown in Figure 4-4, atmospheric levels of CO2 have increased 15% over just the last 30 years, and satellite data confirms that these increased levels of CO2 vary by as little as 8 parts per million across the globe, reflecting the mixing of the gas throughout the atmosphere, making its impact truly global.

As a greenhouse gas, these increased levels have a warming influence on the climate. 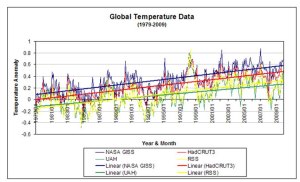 So, while multiple natural climate mechanisms have promoted stasis or cooling within the climate system, increased greenhouse gas emissions from human activities have promoted a warming climate.
The Global Climate Response

But how has the climate responded, particularly over the last 30 years?

The best place to start would be to look at global surface temperatures. Temperature records are maintained by four sources, NASA’s Goddard Institute for Space Studies (NASA GISS), the UK’s Hadley Centre, the University of Alabama at Huntsville (UAH), and Remote Sensing Systems (RSS) in California. The first two focus on measurements from land and ocean-based stations whereas the latter two focus on measurements taken from satellites. 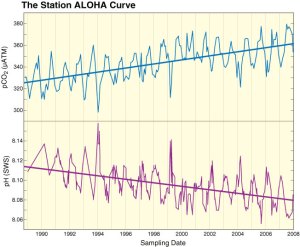 Figure 4-6: As atmospheric CO2 goes up, oceanic pH goes down. Increasing absorption of CO2 by the world's oceans has caused surface waters to become 30% more acidic since the start of the Industrial Revolution. Image credit: C-MORE. CLICK TO ENLARGE

As shown in Figure 4-5, over the last 30 years, all four have shown a notable rise in global temperatures. Not unexpectedly, different areas of the global warm faster than others, with the land-containing northern hemisphere rising faster than the largely oceanic southern hemisphere.

As global temperatures have risen, so have global sea levels. Rises in sea level can come from multiple factors including thermal expansion of the water as it warms and from melting ice sheets. Considering ocean and wind currents and topography, sea levels do not rise uniformly everywhere, with some areas rising faster than others.

As CO2 emissions to the atmosphere have accelerated, so has absorption of the gas into the world’s oceans. This increased absorption is happening much faster than ocean currents can cycle the gas to the deeper ocean. While this increased absorption has provided a massive buffer to human emissions, it results in oceanic surface waters becoming more acidic. The acidity of global surface waters has increased by 30% since the beginning of the Industrial Revolution. This rapid change in oceanic pH can have a profound impact on the survival of ocean life and entire oceanic food chains along with the human societies that rely on them. 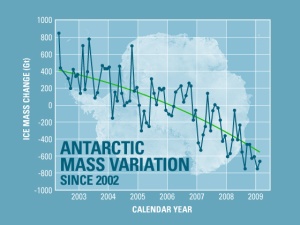 Figure 4-7: Analysis of recent satellite measurements indicate Antarctica has been losing more than a hundred cubic kilometers (24 cubic miles) of ice each year since 2002. Image credit: NASA. CLICK TO ENLARGE

“The current rate of change is much more rapid than during any event over the last 65 million years. These changes in ocean chemistry are irreversible for many thousands of years, and the biological consequences could last much longer.”
– Interacademy Panel, June 2009

Antarctica represents the most inhospitable environment on the planet with freezing temperatures and large wind gusts. Covering an area one and a half times the size of the United States, the continent on the Earth’s southern pole is actually the world’s largest desert receiving less precipitation each year than the Sahara Desert in Africa. This snow and ice-covered continent contains both ice shelves, which float on ocean water, and ice sheets, which rest on land.

Examining Antarctica via satellite, it’s apparent that the ice shelves that can be found along the perimeter of the continent and particularly in West Antarctica are experiencing increasing ice loss. The Larsen B ice shelf which had been in place for 400 years and likely since the last major glaciation 12,000 years ago broke up in 2002 in a period of only 35 days, removing an area the size of Rhode Island. Ice loss at the perimeter is offset by ice gain in the interior as warmer conditions result in increased precipitation. However, a recent analysis of satellite data has concluded that, on the whole, Antarctica has been losing more than a hundred cubic kilometers (24 cubic miles) of ice each year since 2002 as shown in Figure 4-7. 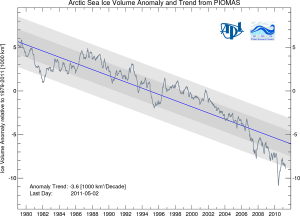 The Arctic around the Earth’s northern pole is largely comprised of sea ice. The extent of this sea ice varies throughout the year with the progression of the seasons. However, warming atmospheric conditions have seen the year-to-year extent and volume of this ice decline dramatically as shown in Figure 4-8, particularly during the summer months. As the ice extent declines the very light-colored ice, which reflects large amounts of sunlight back into space, is replaced by much darker sea water, which absorbs heat. This decrease in reflectivity, or albedo, can accelerate the warming of the region.

The Arctic is also home to large methane deposits in permafrost. As this permafrost melts, it releases this powerful greenhouse gas back into the atmosphere, which can also accelerate warming.

Monitoring of the world’s glaciers has been ongoing since 1894, and the World Glacier Monitoring Service (WGMS) currently compiles data from glaciers on every continent in the world.

Figure 4-9: The world's glaciers have been losing mass in the last 30 years. Image credit: WGMS. CLICK TO ENLARGE

And, as displayed in Figure 4-9, with a warming atmosphere over the last 30 years, glaciers around the globe have been retreating at an increasing rate.

Looking at current conditions, we’ve noted that over the last 30 years, several natural forcings have promoted stasis or cooling within the global climate. Over this same period, atmospheric CO2 and global temperatures have continued to rise despite natural opposition. This continued warming trend is reflected by multiple indicators around the world.

And lastly, while some natural cycles, like solar irradiance and the oceanic PDO, are currently opposing the warming trend, these cycles will cycle back and reinforce anthropogenic warming, driving temperatures even higher.

But why is action related to global warming so urgent?

That will be the subject of our final section.