Changes at the Ends of the Earth

The last few days have seen announcements of some significant changes happening at the Earth’s poles.

In Antarctica, the narrow ice bridge which was connecting the Wilkins Ice Shelf to two small islands has snapped, leaving the shelf, which is the size of Jamaica, likely to break away. Rifts in the bridge had been noticed in the days leading up to the collapse in images taken from the European Space Agency’s Envisat satellite. The shelf is located along the Antarctic Peninsula in western Antarctica, which has seen some of the most rapid temperature rises on the planet. As ice shelves float on underlying water, disintegration of the shelf would not lead to sea level rise. However, ice shelves block the path between open water and land-based ice sheets behind them. In the absence of the shelf, these sheets are no longer prevented from a slow slide into open water. 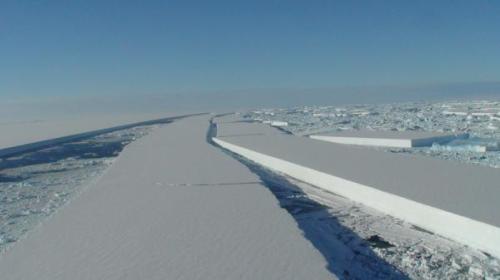 Researchers have been watching the Wilkins shelf for months, noticing fractures and expecting the events that have now come to pass. The melting conditions causing the Wilkins separation are being repeated along ice shelves all around the perimeter of the world’s southern-most continent as NASA noted in a study released early last year.

Meanwhile, researchers with NASA and the National Snow and Ice Data Center are noting that Arctic sea ice is the thinnest it has been in the 30 years of satellite observation. It is also younger. Sea ice that is thicker and remains for more than two years normally comprises around 30 percent of Arctic ice cover. That older thicker ice has dwindled to around 10 percent, replaced by much thinner and younger ice that is much more susceptible to summertime melts.